Bring the magic of Star Wars™ from a galaxy far, far away to your home this Christmas with these stellar gift ideas! Young Jedis and adults alike are sure to find the perfect LEGO® Star Wars toy to live out their galactic fantasies, with sets for all ages and abilities. 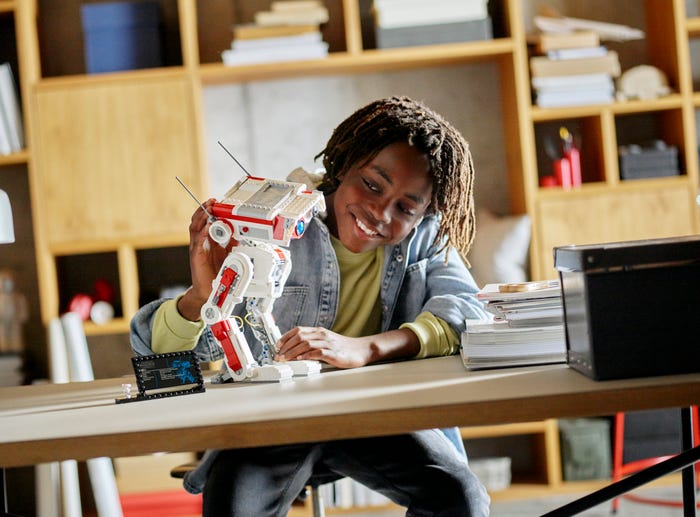 Designed to be shown off, this premium-quality set showcases authentic features such as translucent elements on the back of the head that indicate BD-1’s mood and a compartment for stim canister elements. The set also includes an information sign and a little BD-1 LEGO figure to complete the display.

Kids aged 14 and above will love diving into this detailed 1,062-piece build! 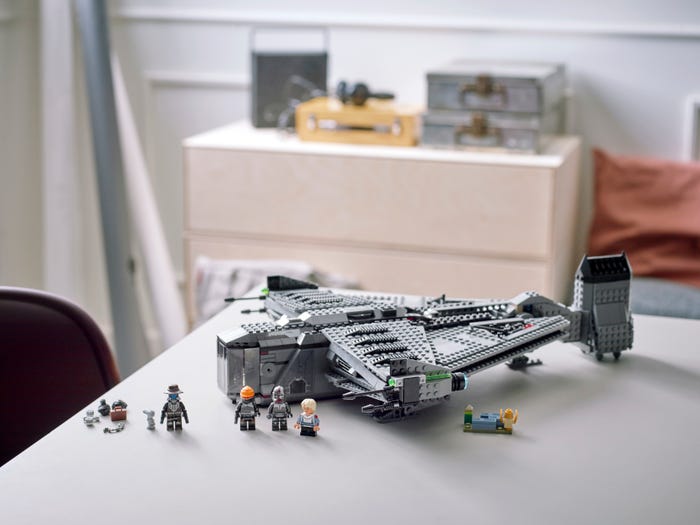 Make this your most adventurous Christmas yet by helping Omega break out from the laser jail cell of bounty hunter Cad Bane’s starship, The Justifier! Team up with droid Todo 360 and Hunter to get away, and fight against Bane and Fennec Shand.

This detailed LEGO brick version of The Justifier features 4 LEGO minifigures and droid Todo 360, plus realistic features such as the rear engine that folds up and down for flight and landing, a detailed cockpit and spring-loaded shooters on the wingtips. Fans of Star Wars: The Bad Batch aged 9+ will love playing out adventures and recreating epic stories aboard The Justifier! 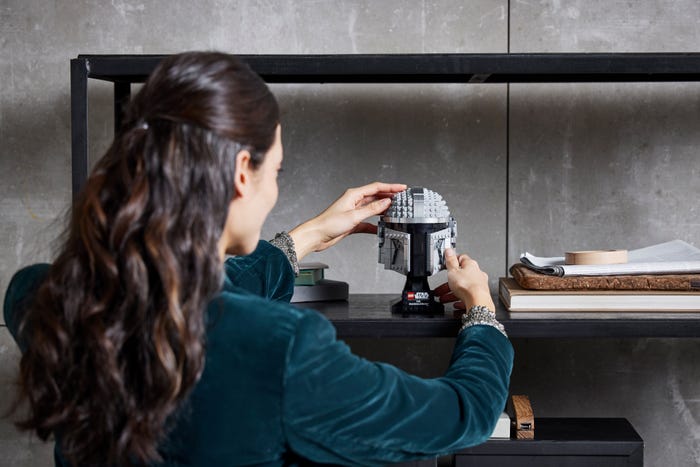 This helmet belonging to the legendary bounty hunter The Mandalorian is part of a range of collectible LEGO Star Wars build-to-display helmet models for adults – including the Luke Skywalker™ (Red Five) Helmet, the Dark Trooper™ Helmet and the iconic Darth Vader™ Helmet – making it the best Christmas gift for avid collectors.

Designed for display, this LEGO replica of The Mandalorian’s helmet stands at over 7 in. (18 cm) tall, creating a striking centerpiece for any environment. The 584-piece model guarantees an immersive building experience – simply channel the Force and get building! 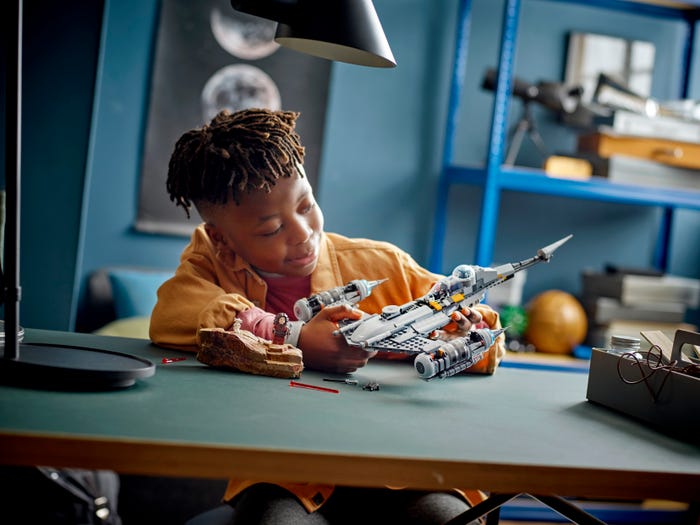 Built for action with authentic, bashed-up details, this 412-piece model of The Mandalorian’s N-1 Starfighter is packed with playful features to inspire young Star Wars fans aged 9 and up. This Christmas, explore the desert world of Tatooine and recreate tales from Star Wars: The Book of Boba Fett with LEGO minifigures of The Mandalorian and Peli Motto, plus everyone’s favorite ‘Baby Yoda’ Grogu and a BD Droid.

Featuring a minifigure cockpit, passenger space for Grogu, a cargo compartment, a spring-loaded shooter and realistic details, there’s endless hours of fun to be had with this Star Wars toy set. 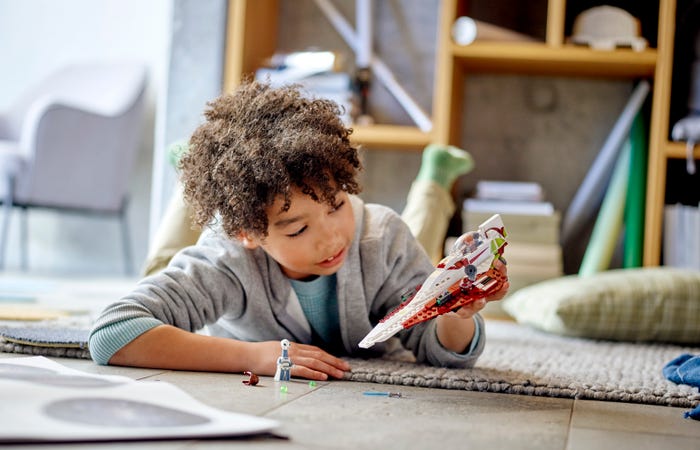 The Jedi Starfighter also comes with 2 LEGO Star Wars minifigures: Obi-Wan and, for the first time ever, the Kaminoan Taun We. Travel to the distant and mysterious Kamino beyond the Outer Rim, and relive epic Star Wars: Attack of the Clones scenes! 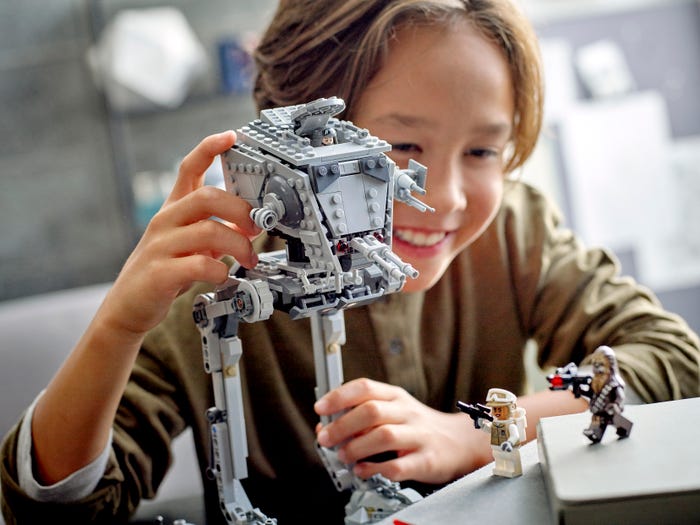 Let the Battle of Hoth begin!

The first-ever LEGO brick-built model of the AT-ST from the Battle of Hoth, this Star Wars toy features an opening hatch and roof for access to the minifigure cockpit, a wheel-operated rotating head, 2 spring-loaded shooters and posable legs. It also comes with 3 LEGO Star Wars minifigures, including Chewbacca with special snow decoration, to inspire imaginative play in children aged 9 and up.

Are you ready to recreate dramatic Star Wars: The Empire Strikes Back action? This 586-piece building set is the best choice for an exciting Christmas present with endless possibilities.

“I would build it with my mom, because she is really good at building LEGO sets.” – Luisa, 8 years old 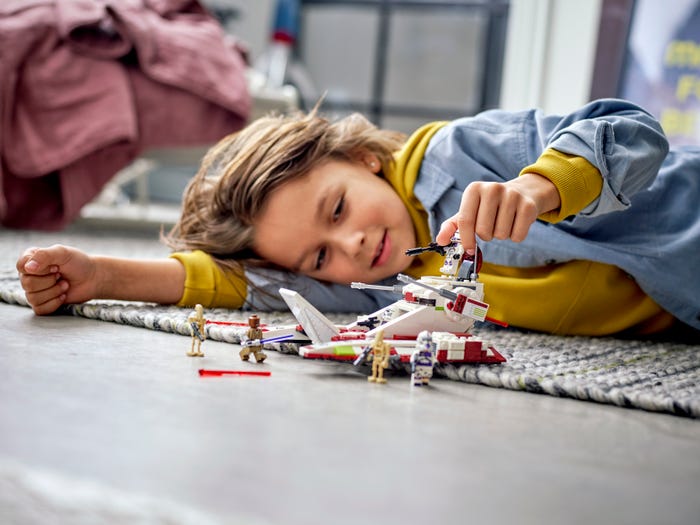 Enter the fray and role-play thrilling battles between Mace Windu’s 187th Legion Clone Troopers and the Battle Droids this Christmas!

With step-by-step instructions included in the box, it’s a perfect gift for all Star Wars: The Clone Wars fans, whether they’re beginner builders or experts. This super-cool Republic Fighter Tank playset features cleverly hidden wheels that make the tank look as if it’s hovering, as well as 2 elevating spring-loaded shooters.

And there are plenty of minifigures to enhance the adventure too. Mace Windu and new-for-this-year versions of the 187th Legion Clone Commander and Troopers, plus 2 Battle Droids are included in the box. All are armed with their own weapons, including a lightsaber, blaster rifle and 4 blasters! 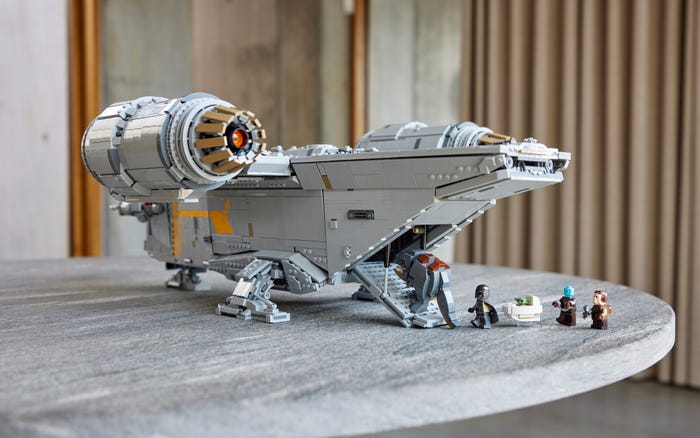 Fire up the engines, and strap in, we’re off to the Outer Rim! This is the ultimate building project for Star Wars:The Mandalorian fans. Channel your inner bounty hunter and get set to enjoy all the epic details of this legendary starship. Lifting off the engine-clad wings you will discover a fully kitted-out interior that includes sleeping quarters, freezing chamber, escape pod, a spacious three-seat cockpit and much much more.

The 5 figures allow for fun, storytelling scenarios with an adorable baby Grogu accompanying The Mandalorian in a hover pram. The Mythrol and Kuiil are brand-new for this set and are accompanied by an incredible brick-built Blurrg creature.

This is an impressive present for fans of the LEGO Star Wars Ultimate Collector Series sets, made for advanced builders. Over 28 in. (72 cm) long, the set is the largest LEGO Star Wars Razor Crest yet and comes with a special display plate to position beside it. 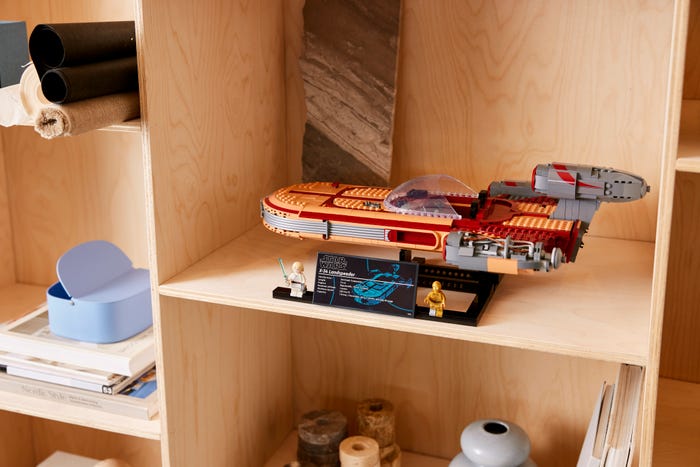 Coming to you from a galaxy far, far away this Christmas is the first-ever LEGO Star Wars Ultimate Collector Series version of Luke Skywalker’s Landspeeder! From the cockpit windscreen to the turbine engine missing its cover, it has everything you remember from Star Wars: A New Hope.

Adult fans can enjoy new building techniques and custom-made LEGO elements to recreate this iconic vehicle in intricate detail. Display it proudly on its stand for a hover effect, along with a plaque showing the X-34 Landspeeder technical data, and 2 LEGO minifigures: the lovable Luke Skywalker and C-3PO. 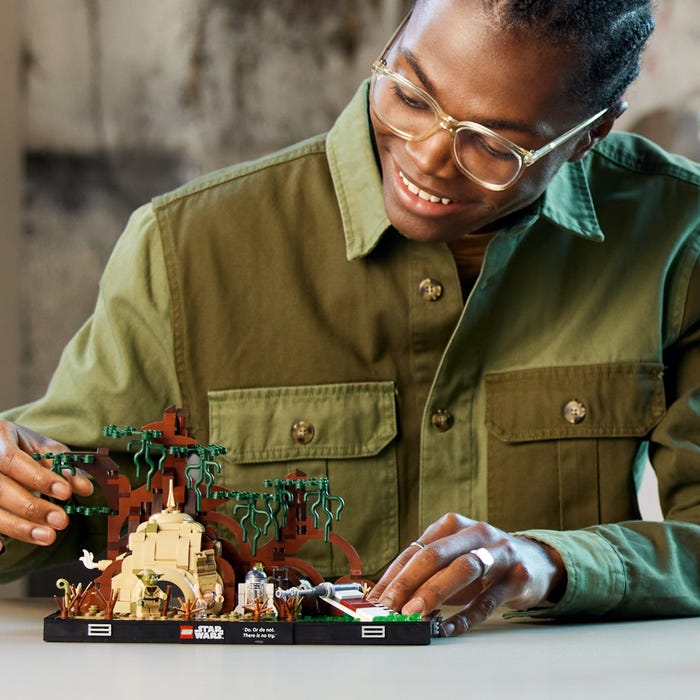 Packed with instantly recognizable details from an iconic Star Wars: The Empire Strikes Back scene for a nostalgic building experience, this 1,000-piece set measures over 6 in. (16 cm) high and 11 in. (29 cm) wide. Recreate the swamps of Dagobah, featuring Yoda’s hut and the wing of Luke Skywalker’s sunken X-wing. Complete the nostalgic display piece with a plaque bearing Yoda’s famous words: “Do. Or do not. There is no try.” 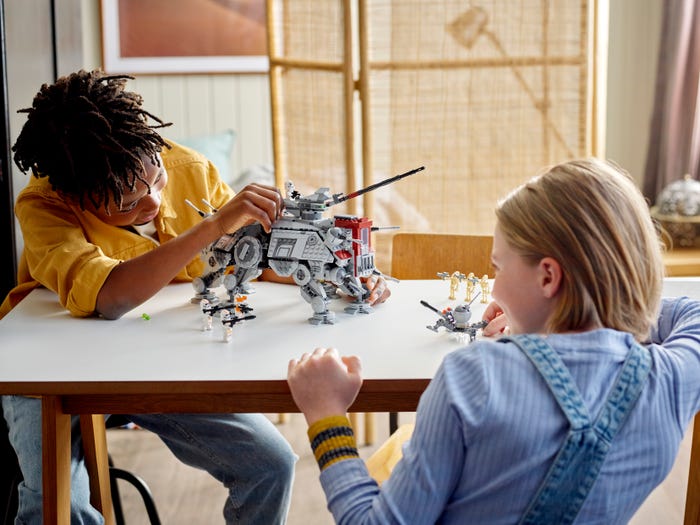 Prepare for battle this Christmas with the mighty AT-TE Walker! Gear up to fight against the Separatist Droid Army, firing the 360-degree-rotating elevating heavy blaster cannon and deploy the 212th Clone Troopers to fight the Battle Droids on the ground.

This fantastic Christmas gift idea for Star Wars: Revenge of the Sith fans aged 9 and up features posable legs, a detachable minifigure cockpit and 2 detailed cabins with space for up to 7 LEGO minifigures. Who will triumph in the Battle of Utapau? It’s time to find out! 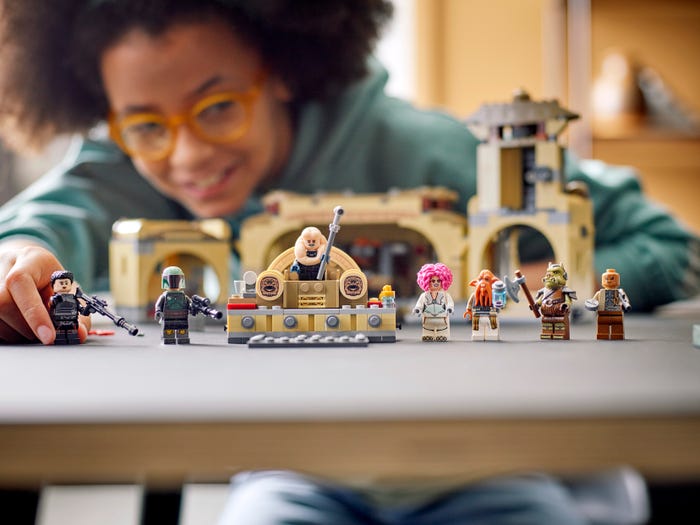 Perfect for creative kids aged 9+ to unleash their imaginations, this Boba Fett’s Throne Room buildable playset lets younglings write their own chapters in the Star Wars: The Book of Boba Fett saga.

The brick-built palace model opens up for easy access to the barbecue area and kitchen, as well as the throne room featuring a throne with pop-up function to eject Bib Fortuna.

“The best time to get it is at my birthday and then I will open it as the last gift, because then if the other gifts were bad, this one is good.” – Tobias, 9 years old

With 7 LEGO Star Wars characters, including Boba Fett, Fennec Shand, a Gamorrean Guard and more, this 732-piece building toy will inspire endless adventures this Christmas and beyond! 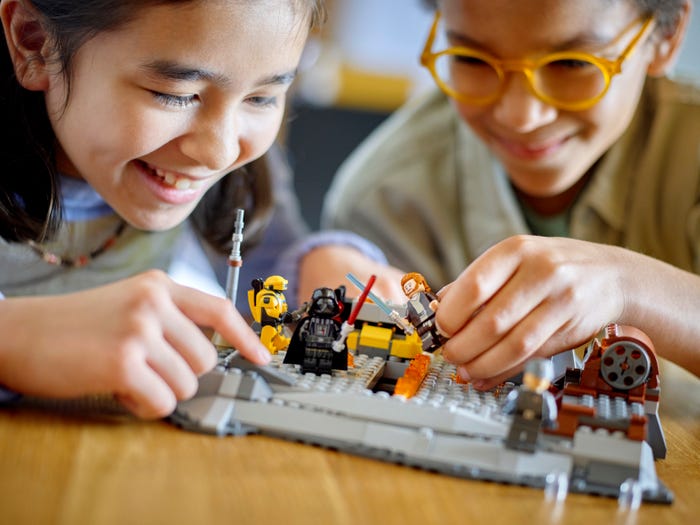 Join legendary Jedi Obi-Wan Kenobi on a fiery battlefield for a daring duel against the evil Darth Vader!

The minifigure of Obi-Wan holds a blue lightsaber and Darth Vader comes with his infamous red lightsaber, ready for an epic battle. Minifigures of Imperial Officer Tala Durith and droid NED-B are also included, as well as 2 rotating battle platforms and a battlefield-splitting fire pop-up function!

Whether you’re more Jedi or Sith, our range of Star Wars toys is guaranteed to make you feel the Force this Christmas. Find the perfect gift for you and your loved ones, and enjoy recreating scenes from the movies with all of your favorite characters!