Raise your master-building ability to another level with THE LEGO® MOVIE 2™ 70823 Emmet’s Thricycle! This awesome construction toy features a minifigure seat, 3 vertically stacked rubber tires and foldout stabilizers. It includes a fuel station with a buildable gas pump, catapult function and parking spot for the Thricycle, plus THE LEGO MOVIE 2 characters—an Emmet minifigure and a brick-built alien invader with a chomping mouth and rotating cyclops eye. 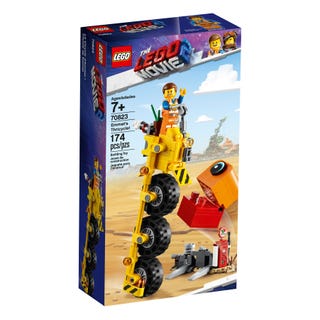