Help Zane escape with the Forward Time Blade under attack from Commander Raggmunk and Slackjaw’s Vermillion Invader. The Invader has two minifigure cockpits, a rubber track and a spring-loaded dual egg catapult to knock down the included barrier—and any minifigure trying to hide behind it. Commander Raggmunk and Slackjaw are armed with Vermillion swords and an axe and Zane has a katana to add to the role-play battle action. Includes three minifigures. 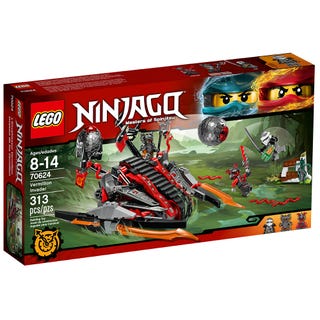 Overall RatingAverage rating4.5out of 5 stars
4.5
(8 Reviews)
100% would recommend this product.

Play ExperienceAverage rating4.1out of 5 stars
4.1
Value for MoneyAverage rating4.3out of 5 stars
4.3
Please note that by submitting a helpfulness vote on a review your IP address is collected and stored by our trusted third party service provider for the sole purpose of preventing multiple entries from the same IP address. To see how to control your personal data, please see our Privacy policy.