In the mystical world of LEGO® BIONICLE®, Toa must unite with elemental creatures to unleash their true fighting potential. Uxar Creature of Jungle must flee the shadow trap, and fulfil the Toa's destiny. For more building and epic adventures, unite with 71305 Lewa Uniter of the Jungle to create an all-powerful Toa! 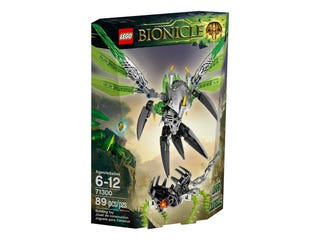