Kids can stage a spellbinding contest with the LEGO® Harry Potter™ Triwizard Tournament™: The Black Lake (76420) playset. A top gift idea for kids aged 8 and up, it features a buildable underwater scene with an arch ruin, 2 caves and flexible LEGO elements to create the effect of 2 minifigures floating. There is also a pier model, with a minifigure-diving function, which can be placed on top of the underwater scene.

Iconic characters
Bring a classic Harry Potter and the Goblet of Fire™ scene to life with 5 LEGO minifigures, including Harry Potter with flipper elements and Viktor Krum with a shark head element to help them rescue Hermione Granger™ and Ron Weasley™. Fans will also be inspired to play by the Merperson minifigure, new-for-March-2023 Grindylow figure and accessory elements such as the Gillyweed potion.

App-assisted building
Let the LEGO Builder app guide your youngster on a building adventure where they can zoom in and rotate models in 3D, save sets and track theirprogress. 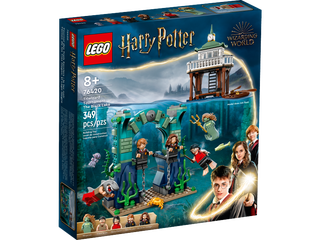