Warning!
Choking Hazard.
Small parts and a Small ball.
Building Instructions
8+Ages
576Pieces
716997169971699Item
The Thunder Raider (71699) with 5 minifigures is the perfect cool toy for kids who love Ninja Mechs and vehicles. This is a 2-in-1 adventure toy that presents a world of exciting play possibilities. Children can build the bulked-up vehicle and then choose to detach the mech from the back and share the fun with friends by playing with one ninja toy each. The perfect LEGO® gift for kids Kids can celebrate the rich history of LEGO NINJAGO® by building this cool Legacy ninja mech playset, whichis an upgraded version of the action toy from season 3 of the TV series. Kids can recreate famous battles between the ninjas and Overlord and the Nindroid Warrior. The best building toys for kids LEGO NINJAGO ninja playsets let kids enter an action-packed fantasy world where they can indulge in imaginative play as the mini ninjas take on the forces of evil. Kids will be completely enthralled as they role-play with ninja builds, NINJAGO mechs, cars, dragons and temples. 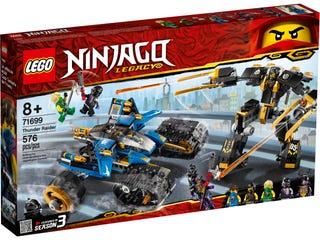 Overall RatingAverage rating5out of 5 stars
5.0
(7 Reviews)
100% would recommend this product.