Jay and Nya are seeking refuge in the lighthouse and are setting up loads of traps ready for an attack by the sky pirates. Dodge the rapid-fire shots from the pirates' jet. Activate the entrance steps' trap function to send invaders tumbling straight into the prison below. Show your ninja parkour skills to climb up and down the walls or slide down the pipe into combat with the enemy. Tip dynamite on the sky pirates, battle Nadakhan for the Djinn Blade and claim victory! 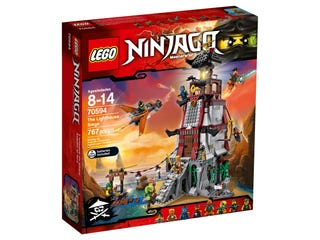 Some exclusions apply. Visit our Deliveries and Returns page for more information.
Overall RatingAverage rating4.7out of 5 stars
4.7
(11 Reviews)
100% would recommend this product.