Enter the End at your peril! Don your diamond armor and helmet, grab your weapons and step into this dayless dimension that floats in the void beneath starless skies. Seek out the dangerous Endermen that dwell in the darkness. Wield your diamond sword and bow to defeat the enemy. Then summon all your powers to confront the mighty Ender Dragon that hovers above the regenerative Ender Crystals. When you’ve slain the dragon, collect the dragon egg to create an exit portal. Prepare yourself for theultimate battle! Rebuild the set for more LEGO® Minecraft™ creations. Includes a Steve minifigure with assorted weapons and accessories, plus 3 Endermen and the Ender Dragon. 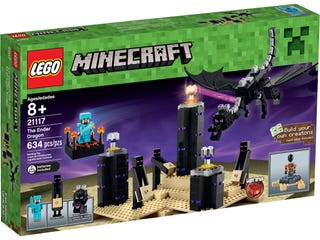 Overall RatingAverage rating4.7out of 5 stars
4.7
(12 Reviews)
92% would recommend this product.