Issue the orders with this buildable and highly posable LEGO® Star Wars Stormtrooper Commander figure. Featuring a back-mounted heavy blaster with spring-loaded shooter, plus a pauldron with detachable ammo pouches, this imposing figure can be modified into a regular Stormtrooper with blaster for double the Imperial fun! 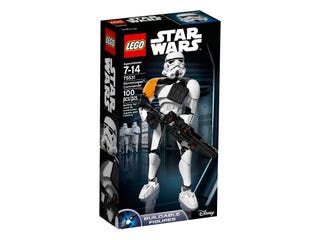