Children can spin up a storm and take on ninja challenges with the LEGO® NINJAGO® 70683 Spinjitzu Slam - Zane spinning top toy. This fun-packed playset features a Zane Tornado Spinner which holds a minifigure and fits onto the easy-to-build spinner launcher, plus a buildable training dummy to use as a target and 2 shurikens that can also be sent spinning by the launcher. Great for solo or social play, kids will love recreating the ninja tornado effect as seen on the NINJAGO TV show and making up their own Spinjitzu Slam competitions with friends. This LEGO NINJAGO spinner toy includes a collectible, new-for-June-2019 Zane FS minifigure with a ‘powered-up’ hood element for creative role-play. 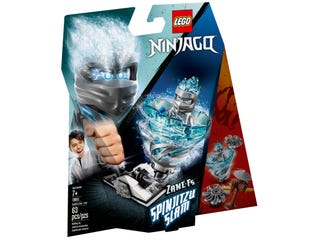