Enjoy the magic of Christmas with Santa's Workshop, a festive addition to the LEGO® Winter Village Series! Gather your family around the Christmas tree to build this enchanting winter wonderland. Help the elves make the toys, feed the reindeer and help Santa load up his magical sleigh. Santa's wife has baked cookies and the clock tower shows it's nearly time for Santa to deliver the presents—all at the most wonderful time of the year! Includes 6 minifigures: Santa with red gift sack, Mrs. Clauswith cookie tray and 4 elves with pointy ears and hats. 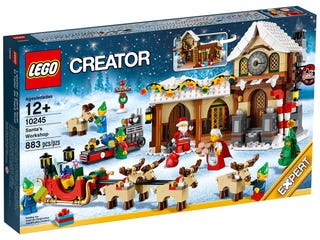 Overall RatingAverage rating4.1out of 5 stars
4.1
(114 Reviews)
82% would recommend this product.