VIPs: Get a Fun and Funky VIP Add On Pack with purchases over $50*

Stage a mech battle between bounty-hunting Ronin—assisted by Nya—against Skulkin warriors. Ronin's highly posable mech features a golden bow with a spring-loaded shooter, a net-stud shooter, a rifle, and a compartment to store stolen treasure or ammunition. The posable Skulkin mech is wielding 2 silver dark blades and there are loads of other minifigure weapons, including Krazi's Double-Bladed Skulkin Axe, to dial up the conflict. Detach the skateboard or flyer from Ronin's Salvage M.E.C. to help him escape. Includes 4 minifigures. 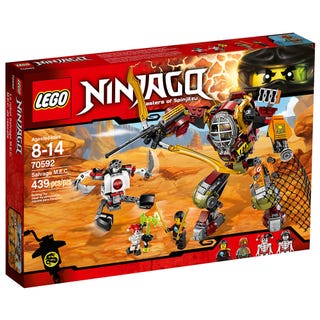