Play out action-packed LEGO® Star Wars: Episode VIII missions with the Resistance Bomber. This feature-packed model includes a button-activated bomb release function, spring-loaded shooters, 2 opening rear gun turrets with space for a minifigure, elevating rear guns, a 2-minifigure front cockpit with detachable canopy and a removable top section for easy access. It can also stand on any even surface when not in use. This set includes 5 minifigures. 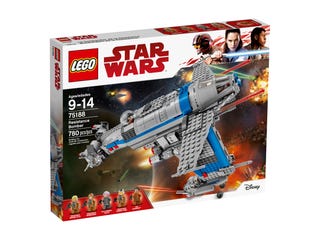