Help the police lock up the bad guys on LEGO® City Prison Island! Watch the crooks work out in the prison yard and open up the prison to see the crooks make their escape plans. You and the police have to be on high alert to catch the crooks sliding through the sewer to catch the getaway boat! Jump in the helicopter and stop them from making an aerial escape in the hot air balloon. They’ll do anything to escape from Prison Island! 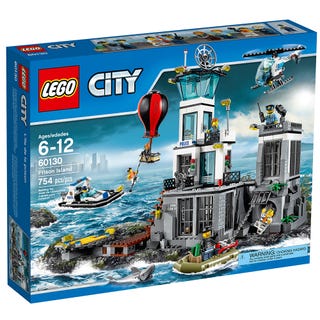 Overall RatingAverage rating4.3out of 5 stars
4.3
(15 Reviews)
93% would recommend this product.

Play ExperienceAverage rating4.6out of 5 stars
4.6
Level of DifficultyAverage rating2.5out of 5 stars
2.5
Value for MoneyAverage rating3.7out of 5 stars
3.7
Please note that by submitting a helpfulness vote on a review your IP address is collected and stored by our trusted third party service provider for the sole purpose of preventing multiple entries from the same IP address. To see how to control your personal data, please see our Privacy policy.