Fun and adventure is on the horizon with the mighty LEGO® City Ocean Exploration Ship (60266). This super-long ship not only floats on water, it has everything kids need for endless ocean exploration. There’s a shark cage, working crane, research submarine, helicopter and even a pirate shipwreck with hidden treasure! And with 8 explorer minifigures, including LEGO City TV character Harl Hubbs, the scene is set for action-packed escapades.

Cool construction sets for kids
LEGO City is proud to support the work of National Geographic Explorers. And with feature-rich buildings, realistic vehicles and fun characters, our Ocean playsets deliver an exciting, open-endedworld of undersea exploration and adventure for budding explorers. 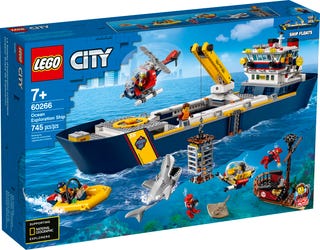