Build the bright and airy Modern Home, featuring a white, brown and pale-blue color scheme, large windows, solar skylight, upper-level bedroom and balcony with parasol, and a ground-level room with sofa and armchair. Mix and match the buildable modules to create a rooftop terrace, and easily swap the window, door and other modular sections to customize the house with the new-for-June-2017 LEGO® Creator modular system. Combine this set with the 31067 and 31069 modular-system sets to create a dream house with endless build and play opportunities! This 3‑in‑1 LEGO Creator model can also be rebuilt to create a Lakeside Home or a Garden Home. Includes 2 minifigures. 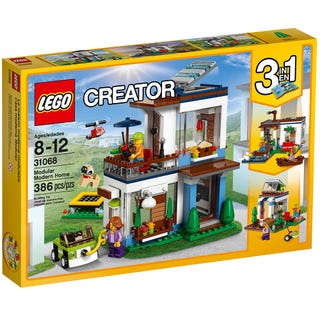 Some exclusions apply. Visit our Deliveries and Returns page for more information.
Overall RatingAverage rating3.9out of 5 stars
3.9
(15 Reviews)
80% would recommend this product.

Play ExperienceAverage rating3.3out of 5 stars
3.3
Level of DifficultyAverage rating2.3out of 5 stars
2.3
Value for MoneyAverage rating4out of 5 stars
4.0
Please note that by submitting a helpfulness vote on a review your IP address is collected and stored by our trusted third party service provider for the sole purpose of preventing multiple entries from the same IP address. To see how to control your personal data, please see our Privacy policy.