Join the adventure with Lloyd and Jay, as they fight to get to the Sword of Fire before the snake villain. Featuring Jay's blue dragon, the snake villain's helicopter, the Lost Temple with lava ball, and other accessories. This LEGO® Juniors set offers an easy start to building with the LEGO brick for ages 4-7, with easy-to assemble models featuring iconic Ninja adventures. Includes 3 minifigures: Lloyd, Jay and a snake villain. 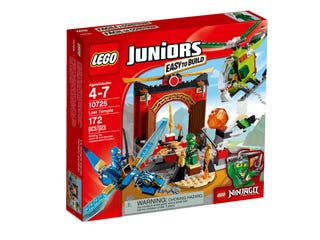 Some exclusions apply. Visit our Deliveries and Returns page for more information.
Overall RatingAverage rating4out of 5 stars
4.0
(1 Reviews)
100% would recommend this product.