Ride Lance into the village of Ghoulia and battle Grimroc the giant gargoyle! Prepare the buildable robot horse for some jousting action, and charge against the buildable Grimroc figure with its lightning tridents. The gothic village scene has lightning strike elements, a cobweb and a catapult that can fire lightning ball elements at Lance. Includes two minifigures. 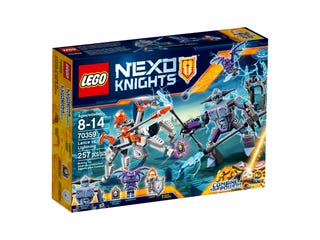