Team up with Kai to rescue Zane from Kryptarium Prison where he is being held alongside bad guys Captain Soto and the 4-armed Giant Stone Warrior. This action-packed model includes a drop-down main entrance gate, 2 prison cells (1 with an explode-function door), an escape route through the toilet, plus a table with a catapult function, hidden treasure map and shuriken weapon. Includes 5 minifigures. 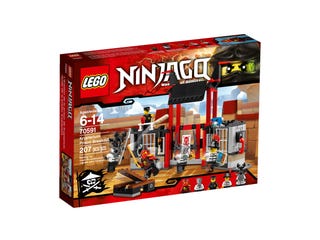