Now your favorite Overwatch® fan can build a part of Junkertown out of LEGO® bricks with the 75977 Junkrat & Roadhog set. Based on the internationally acclaimed team-based action game, this Overwatch toy set recreates the apocalyptic atmosphere of Junkertown, a highly popular Overwatch map. This playset features the iconic crime duo from Overwatch: Roadhog and Junkrat. Roadhog comes as a large, highly-detailed BigFig with his Chain Hook and Scrap Gun. The minifigure Junkrat has his iconic peg-leg and Frag Launcher. Fans and kids alike will love the authentic character details, the yellow chopper bike and display diorama inspired by the Junkertown map. 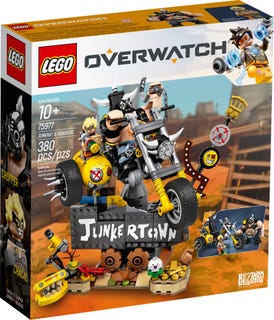