In the magical LEGO® NEXO KNIGHTS™ world, Jestro is using the Book of Monsters to populate his evil army. Pitch heroic Lance Richmond against the giant Sparkks monster! Stop Jestro from rampaging through Knighton and ruling the kingdom with a magical iron fist. Includes 2 minifigures: Lance Richmond and Jestro. 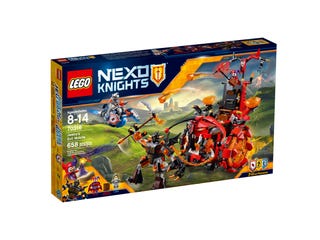