Here comes the awesome Heavy-Haul Train! It’s busy at the LEGO® City goods yard. The welder is carrying out some last minute repairs on the tracks while the driver and engineer do the final checks on the powerful diesel engine. Climb aboard the giant, sliding crane, lower the hook and carefully lift the heavy helicopter onto the flatbed wagon. Then take control of the rugged backhoe and gather the heavy bricks together while the crane operator scoops them up and drops them into the hopper wagon.When all the cargo is aboard, load up the backhoe and you’re ready to roll… “All aboard!” This tough motorized train with an 8-channel, 7-speed infrared remote control can haul just about anything! Includes 5 minifigures with assorted accessories: a train driver, engineer, welder, crane operator and a backhoe driver. 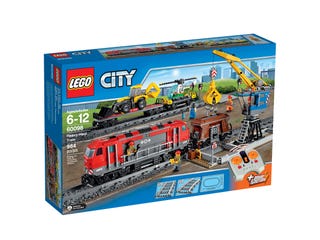 Overall RatingAverage rating4.2out of 5 stars
4.2
(33 Reviews)
70% would recommend this product.

Play ExperienceAverage rating4.3out of 5 stars
4.3
Value for MoneyAverage rating3.5out of 5 stars
3.5
Please note that by submitting a helpfulness vote on a review your IP address is collected and stored by our trusted third party service provider for the sole purpose of preventing multiple entries from the same IP address. To see how to control your personal data, please see our Privacy policy.