Experience a classic Hot Rod race day with this multifunctional set. The Ford F-150 Raptor comes with suspension and a trailer to transport the Model A Hot Rod to the race. Prepare the Model A in the team garage, which comes fully equipped with engine crane, welding machine and an oil can, and turn it around to reveal a victory podium and trophy to celebrate victory. Includes 4 minifigures: a Hot Rod racing driver, racing driver, mechanic and a race official. 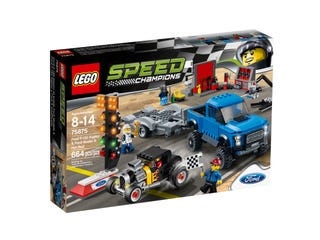 Overall RatingAverage rating4.9out of 5 stars
4.9
(10 Reviews)
100% would recommend this product.