Hop aboard the sleigh and join Anna and Olaf as they pay a visit to Queen Elsa’s beautiful ice palace for some frosty fun! What will they do first? Play hide and seek behind the secret staircase, or go skating around the castle? They could ski down the ice hill or prepare frozen treats in the castle’s ice cream bar and then get ready for a picnic in the snow under the magnificent icicle tree. It’s all up to you! First have fun building Elsa’s Sparkling Ice Castle. Then it’s time to play! Includes Queen Elsa and Princess Anna mini-doll figures, plus Olaf the snowman. 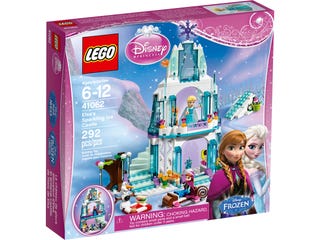 Overall RatingAverage rating4.2out of 5 stars
4.2
(29 Reviews)
90% would recommend this product.

Play ExperienceAverage rating4.5out of 5 stars
4.5
Level of DifficultyAverage rating2.3out of 5 stars
2.3
Value for MoneyAverage rating3.8out of 5 stars
3.8
Please note that by submitting a helpfulness vote on a review your IP address is collected and stored by our trusted third party service provider for the sole purpose of preventing multiple entries from the same IP address. To see how to control your personal data, please see our Privacy policy.