Reinforce any LEGO® Star Wars™ construction toy collector’s forces with the heavily armored LEGO Star Wars 75233 Droid Gunship. As seen in Star Wars: The Revenge of the Sith, this detailed model features an opening cockpit with space for a Kashyyyk Battle Droid LEGO figure, lowering landing gear and non-firing directional cannons at the front. Add no less than 8 flick missiles and 2 stud shooters, plus Chief Tarfful and Yoda minifigures to the mix, and you have the perfect recipe for a galaxy of action-packed LEGO Star Wars adventures! This building toy includes 2 minifigures and 2 LEGO figures. 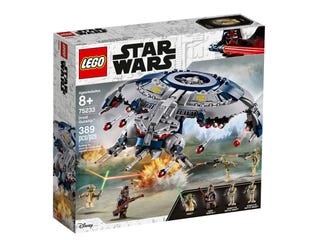 3.2
Please note that by submitting a helpfulness vote on a review your IP address is collected and stored by our trusted third party service provider for the sole purpose of preventing multiple entries from the same IP address. To see how to control your personal data, please see our Privacy policy.