Youngsters can take a deep dive into the Dragon of the East legend with this LEGO® Monkie Kid™ toy playset (80037). The set reimagines classic Dragon of the East tales as underwater adventures and features a posable dragon with 2 spring-loaded shooters, a green Fire Ring, plus a detachable toy submarine with 2 stud shooters. There are also 4 LEGO minifigures, including a new-for-June-2022 Dragon of the East character, Monkie Kid and Mr. Tang with diving accessories. Monkie Kid’s stud-shooting, Golden Staff-shaped submarine and Savage’s manta ray underwater jet adds to the battle play possibilities.

The joy of building
This unique buildable toy makes a cool gift for kids aged 8 and up. It comes with clear, illustrated instructions for each build, and the free LEGO Building Instructions app also has viewing tools to make the experience extra fun. 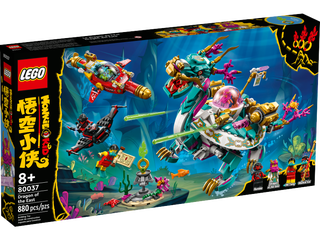