Gather the family for a rewarding build and play experience with the LEGO® ǀ Disney 71044 Train and Station. Kids will love to join Disney characters Mickey Mouse, Minnie Mouse, Chip, Dale and Goofy for magical adventures with this awesome LEGO train set, featuring a motorized steam-style locomotive with tender, passenger car and a luxurious parlor car, plus an oval track and an iconic Disney Parks®-style station building. This set comes with an array of cool details, including app-controlled functionality. Use a smart phone or tablet to drive the locomotive forward, reverse and emit realistic sound effects. Joining up the train cars is simple with the magnetic LEGO couplings, and the panels on the parlor car open for access to its detailed interior complete with table, armchairs, teapot and cup. And the fun doesn’t end there! Inside the toy train station building there’s an array of intricate brick-built furnishings and details, including draped windows, wall clock, ceiling chandelier and a tower room with a little LEGO surprise! 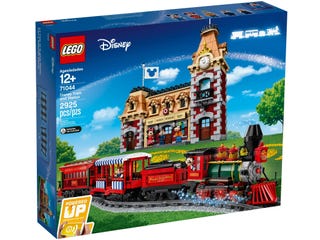 Overall RatingAverage rating4.1out of 5 stars
4.1
(27 Reviews)
70% would recommend this product.

Play ExperienceAverage rating4.1out of 5 stars
4.1
Level of DifficultyAverage rating2.8out of 5 stars
2.8
Value for MoneyAverage rating3.9out of 5 stars
3.9
Please note that by submitting a helpfulness vote on a review your IP address is collected and stored by our trusted third party service provider for the sole purpose of preventing multiple entries from the same IP address. To see how to control your personal data, please see our Privacy policy.