New for March 2017, LEGO® BrickHeadz construction characters bring you a brand new way to collect, build and display iconic characters from your favorite movies, TV series, games and comics. This BrickHeadz construction character featuring Captain Armando Salazar is fun to build using LEGO System bricks that recreate all of his iconic details, including buildable hair and decorated waistcoat and buttons. He also has a buildable and detachable cutlass in hand and stands on a baseplate with series number and BrickHeadz icon for easy display. Add some Disney Pirates of the Caribbean: Dead Men Tell No Tales swashbuckling action to your home, office or anywhere you like. 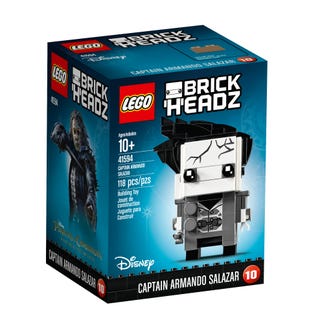 Overall RatingAverage rating4.9out of 5 stars
4.9
(8 Reviews)
100% would recommend this product.

Play ExperienceAverage rating3.3out of 5 stars
3.3
Value for MoneyAverage rating4.5out of 5 stars
4.5
Please note that by submitting a helpfulness vote on a review your IP address is collected and stored by our trusted third party service provider for the sole purpose of preventing multiple entries from the same IP address. To see how to control your personal data, please see our Privacy policy.