Ms. Marvel is on a mission to help retrieve Captain America’s shield from Super-Adaptoid, who is shooting back with his Power Blasts. Use her super-extending arms to attach her to the jet, which features movable wings for flying and attack modes, a minifigure cockpit with space for a shield, and dual disc shooters. Includes three minifigures. 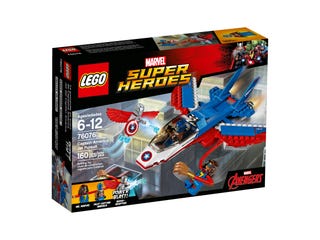