Not VIP?
WARNING:
CHOKING HAZARD.
Toy contains small parts and a small ball. Not for children under 3 years.
Building Instructions

Cole has been imprisoned in the island caves during the Tournament of Elements. Place him in the cockpit of the super Boulder Blaster, grab the retractable handle to take off and bust out of there. Cole will need all his elemental powers to get past Zugu and Sleven who are armed and ready for battle. Turn the wheel to unleash the hyper-powerful automatic 8-missile NINJAGO™ rapid shooter and smash their Anacondrai outpost to smithereens! Includes 3 minifigures with assorted weapons: Cole, Zugu and Sleven. 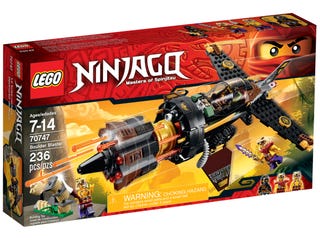