Discover the tomboy princess who's more than ready for a fight with this striking play set, featuring the ferocious—but hilarious—Chaos Chariot with chomping giant Globlins. In the futuristic and off-beat LEGO® NEXO KNIGHTSTM world, Macy must return the Book of Deception to the royal wizard's library and save the day! Includes 2 minifigures: Beast Master and Macy Halbert. 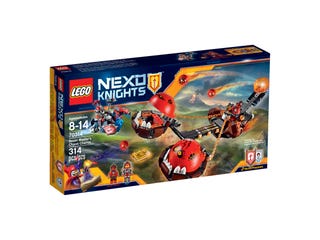