Make a quick escape with Finn and Rose in the Resistance Transport Pod. This detailed LEGO® Star Wars version of the craft from Star Wars: Episode VIII features a 2-minifigure cockpit with removable canopy and detachable panels that reveal a rear storage compartment with space for the included BB-8 figure and a weapon store. There’s also a stud shooter at the side, aimed by turning the rear engine, plus dual spring-loaded shooters underneath. Includes 2 minifigures and a BB-8 figure. 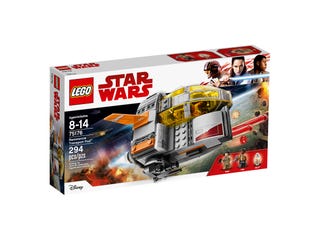