Watch the Justice League™ take on Brainiac in Cosmic Clash, a thrilling, original LEGO® DC Comics Super Heroes movie! Until now, the super hero team has triumphed over every foe, but all of those enemies had one thing in common: they were alive. This time, they face Brainiac, a super-intelligent machine with the power to bend time itself, whose mad quest endangers all life on Earth and beyond. Discover whether Batman™, the world’s greatest detective, can outsmart the most evil supercomputer in the galaxy—and then play with the included limited edition LEGO® DC Comics Super Heroes Cosmic Boy minifigure! 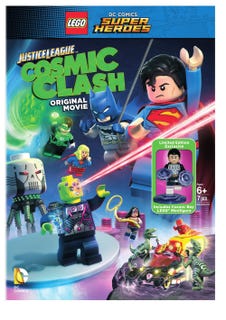