Be a part of the fearless LEGO® City coast guard crew on the Heavy-duty Rescue Helicopter, featuring sliding doors on the sides, opening ramp in the back with space for the included water scooter, 2-minifigure cockpit and a rotating crane arm with lowering winch. This fun set also includes a lighthouse, shipwreck and a kayak with paddle, plus 4 minifigures and a shark figure. 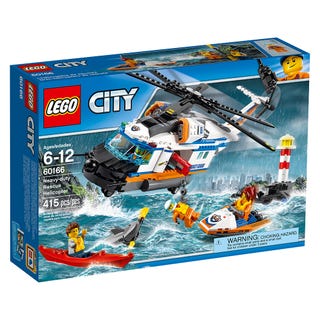 Some exclusions apply. Visit our Deliveries and Returns page for more information.
Overall RatingAverage rating4.4out of 5 stars
4.4
(12 Reviews)
92% would recommend this product.