Swoop to conquer the Dragon’s Forge with Kai and Nya on the Fusion Dragon, rescue their parents from the Vermillion and claim the Reversal Time Blade. The Dragon’s Forge building has loads of play-starting features and functions, including a hidden Dragon Dagger to activate the turning chimney function, a blacksmith’s hammer function and a leisure area. The highly posable, two-headed Fusion Dragon has seats for two minifigures and a shooting crossbow to take on the buildable Buffmillion mech. Also includes six minifigures with weapons to increase the role-play battle options. 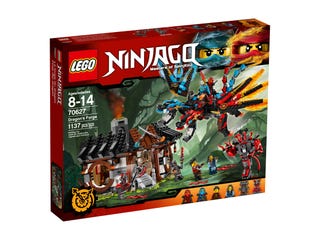