A holiday centerpiece for the home or office

Colorful façade with opaque windows, a chimney stack and fireplace.

Press down on the chimney smoke to light up the cozy fire.

Bedroom with a chocolate bed and cotton candy lamp.

Perfect for transporting the gingerbread baby.

The glowing fireplace also adds to the atmosphere indoors.

Bathroom area complete with a toilet and bathtub.

Enjoy a festive build and play experience with the LEGO® Creator Expert 10267 Gingerbread House. A treasure chest of magical details, this amazing model features frosted roofs with colourful candy buttons and a delicious facade with candy-cane columns, glittery windows and a tall chimney stack with a glowing fireplace. Inside the house there’s an array of fun details and candy furnishings including a tasteful bedroom with chocolate bed and cotton candy lamp, and a bathroom with the essential toilet and bathtub. This wonderful LEGO Gingerbread House sets the scene for imaginative adventures with the gingerbread family. Children can light up the cozy fireplace, help clear the sidewalk with the snow blower and nestle the gingerbread baby in its carriage. It also includes a decorated Christmas tree with wrapped gifts and toys, including a rocking horse and a toy train. This advanced LEGO set delivers a challenging and rewarding building experience and makes a great seasonal centerpiece for the home or office. Includes gingerbread man, woman and baby figures. 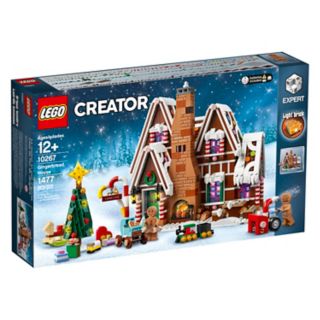 Overall RatingAverage rating4.4out of 5 stars
4.4
(59 Reviews)
85% would recommend this product.