Team up with Spider-Man and Iron Man to catch up with The Shocker’s Van and tackle the Vulture’s attacks in this thrilling LEGO® Marvel Super Heroes Beware the Vulture set. The Shocker’s Van opens up for easy play and includes a mounted, adjustable 6-stud rapid shooter, a buildable rifle and buildable tech egg, while Vulture’s wings have 2 detachable stud shooters. Includes 4 minifigures with assorted weapons and accessory elements such as Spider-Man’s firing Power Blasts. 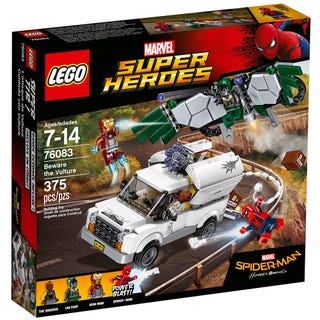