With Christmas just around the corner, it’s time to start thinking about the amazing gifts you’re going to buy to treat the teenagers and young adults in your life.

Whether they’re a Harry Potter™ superfan, or they’re passionate about DIY home décor, you’re sure to find something from the LEGO® Store that will bring them joy on Christmas morning!

Make sure the gifts you give are the best ones under the tree with our list of the best Christmas gifts for teenagers and young adults. 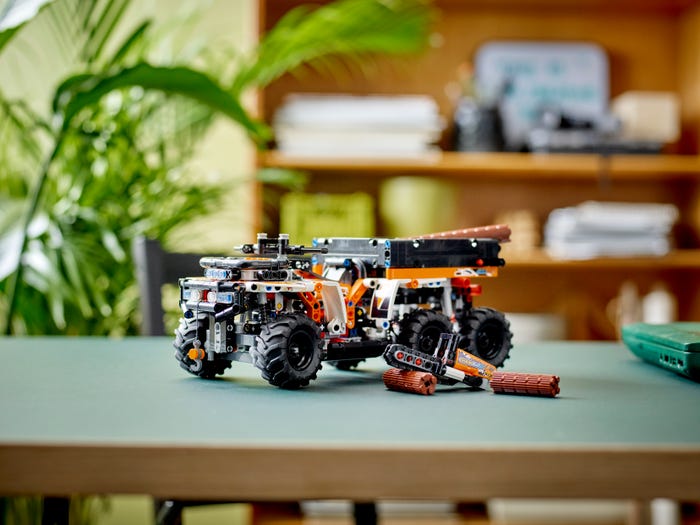 The set even comes with a little toy chainsaw, sticker graphics for cool customisation and 20 small log pieces that can be joined together to make larger pieces – it’s got all the accessories you need!

With the engine’s moving pistons, a winch, and a tipping cargo bed, this is the best Christmas gift for teenagers and young adults interested in engineering. 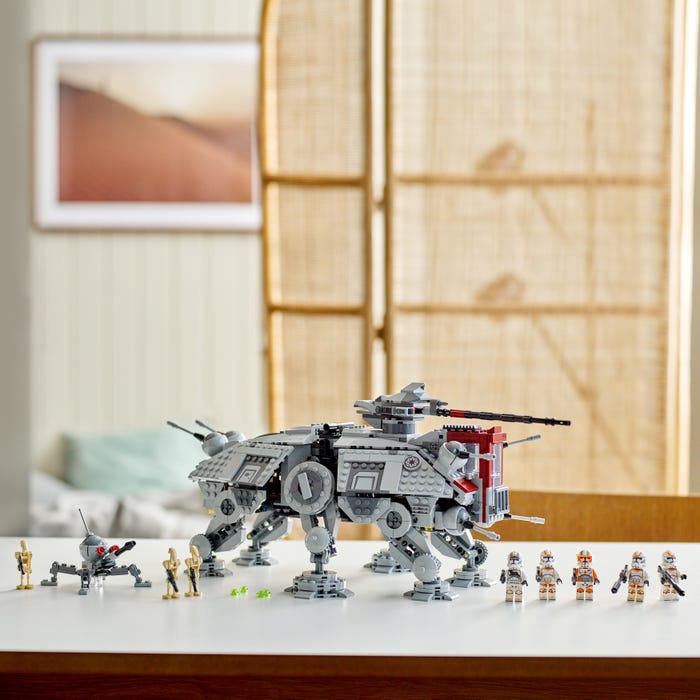 Relive an epic battle from Star Wars™: Revenge of the Sith with this detailed LEGO recreation of an AT-TE Walker!

This action-packed Star Wars™ building toy features a detachable cockpit and two cabins with space for up to seven LEGO minifigures in total, as well as a 360-degree rotating blaster cannon and posable legs to bring the model to life.

With five LEGO minifigures – including Commander Cody and three Clone Troopers – to pit against the Battle Droid LEGO figures and buildable Dwarf Spider Droid, this set gives Star Wars fans everything they need to recreate the famous Battle of Utapau! 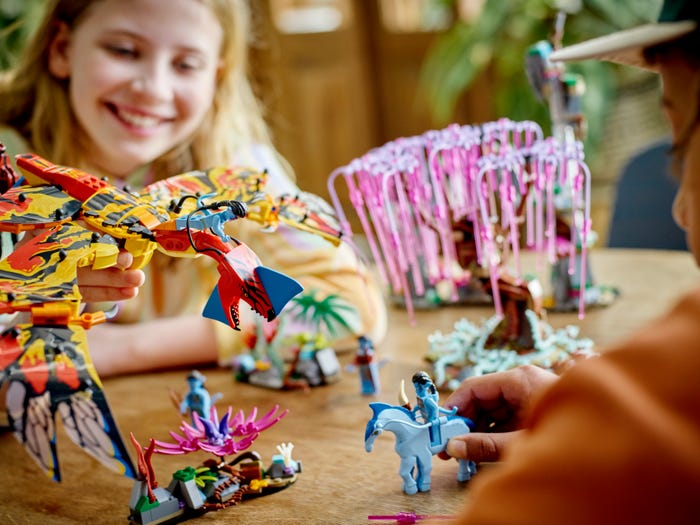 Teenagers, young adults and science fiction fans can recreate and display stunning scenes from the 2009 film – the set even includes minifigures of the central characters, including Jake Sully, Neytiri, Mo’at and Tsu’tey, as well as Toruk and Direhorse animal figures.

Whether the person you’re shopping for is a beginner builder or a life-long LEGO® | Avatar fan, there are hours of fun to be had with this cool set. 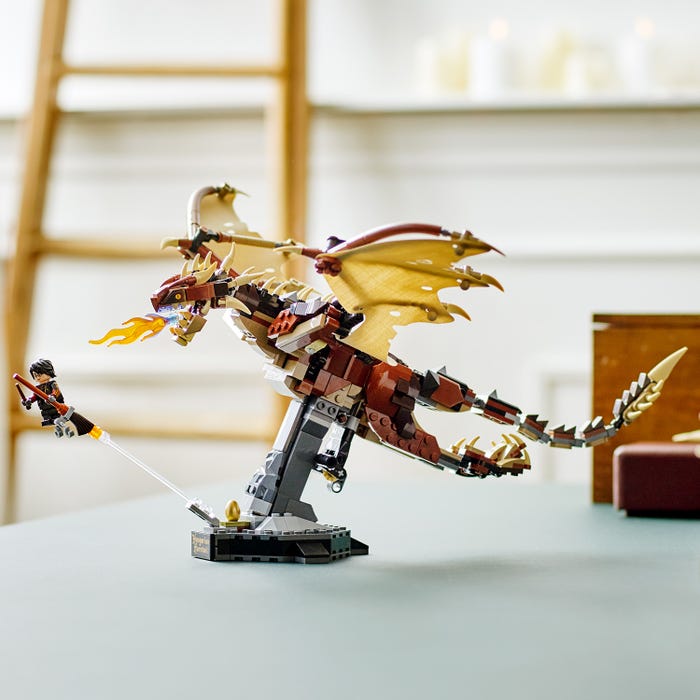 Bring the young witches, wizards and Muggles™ in your life a truly spellbinding gift this Christmas with the LEGO® Harry Potter™ Hungarian Horntail Dragon set.

This 671-piece set includes a golden egg from the Triwizard Tournament and material for the dragon's membrane wings. There's even a Harry Potter minifigure riding a Firebolt broomstick to escape the dragon chasing him.

With a full wingspan measuring over 40cm, this cool creature makes an impressive display piece in any home or office! There’s a handle at the base to flap its jointed wings too! 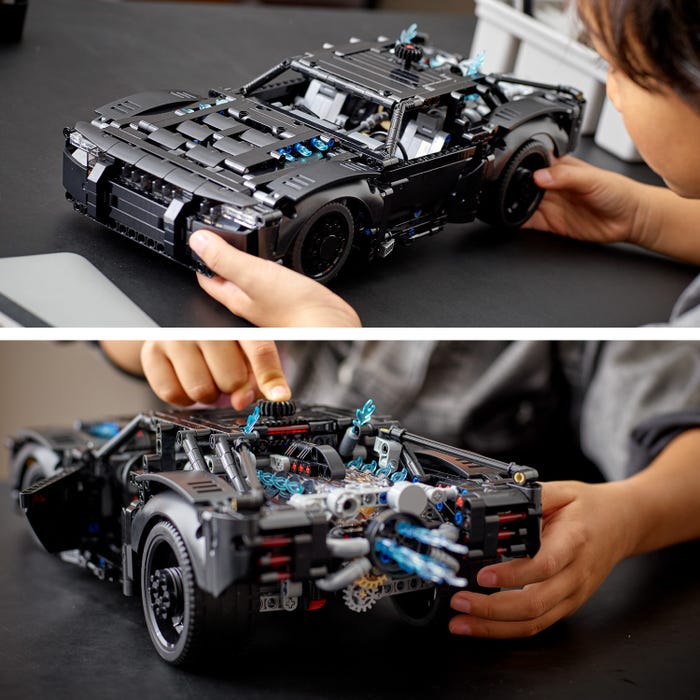 This true-to-life recreation of the LEGO® Technic™ BATMOBILE™ from the 2022 THE BATMAN movie will be a hit with vehicle enthusiasts and Super Hero fans this Christmas.

There are tons of cool features for teenagers and young adults to discover, including steering on the front wheels, differential on the back wheels, a flame that spins, plus opening doors and bonnet!

This replica of an iconic vehicle is a rewarding build that looks stunning on display in any bedroom, perfect for LEGO® fans aged 10 and above who are looking for their next challenge! 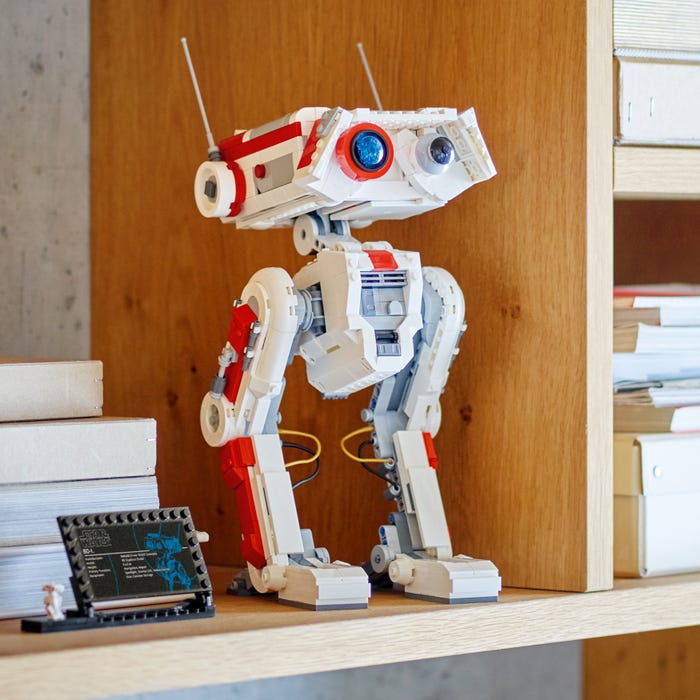 This detailed model of the droid from action-adventure video game Star Wars™ Jedi: Fallen Order comes with 1,062 pieces, an information sign and a BD-1 LEGO® figure that can be added on as an accessory.

The completed build stands at over 31cm tall – that’s big enough to catch the eye of everyone who enters the room!

Teenagers and young adults who are fans of the LEGO® Star Wars™ range will be thrilled to add the BD-1 droid to their collection.

LEGO® Marvel I am Groot 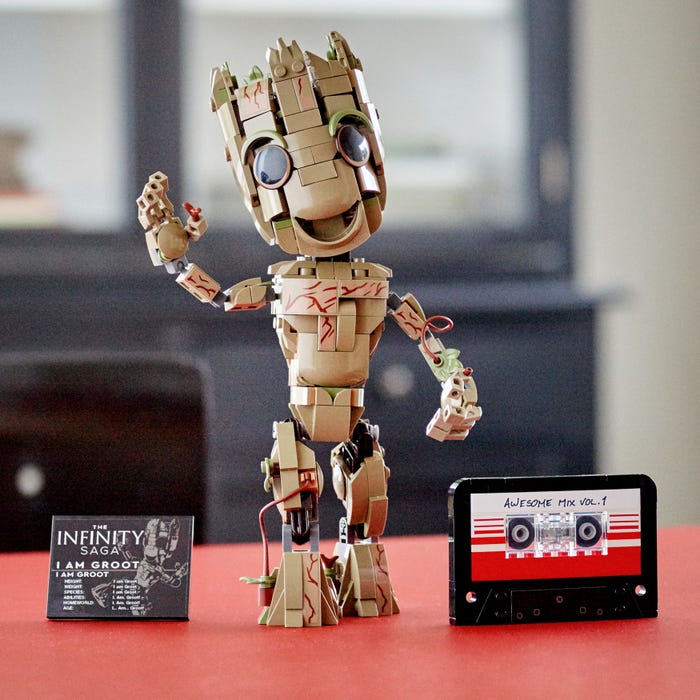 Bring home one of the Marvel Cinematic Universe’s best-loved characters this Christmas with a movable model of Baby Groot!

Once it’s built, they can have fun positioning and posing the LEGO® Marvel I am Groot figure as if he’s really dancing. There’s even a pretend cassette tape included!

With just 476 pieces to put together, teenagers and young adults will be grooving with Groot in no time!

This is the best Christmas gift for Marvel Studios’ Guardians of the Galaxy fans aged 10 and up. 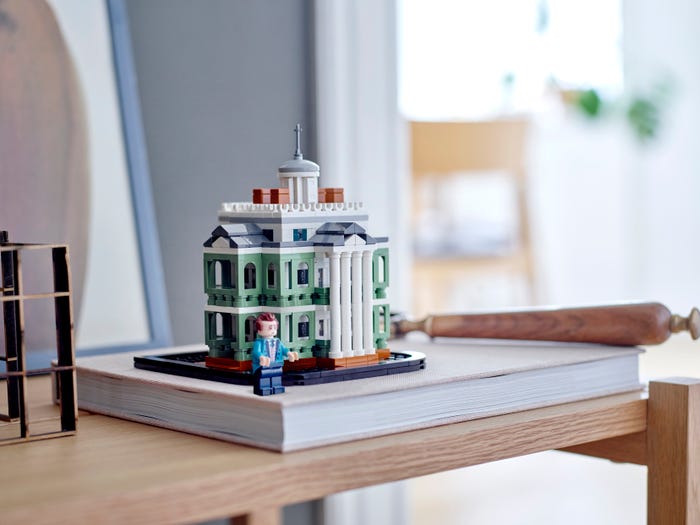 Do you know someone who loves Disneyland’s famous Haunted Mansion ride? This Christmas, get them a buildable LEGO® ǀ Disney Mini Disney The Haunted Mansion that’s just as hair-raising as the real ride but only a fraction of the size!

There’s an exclusive butler minifigure to add to the display, and fans will love the added details of the Hitchhiking Ghosts, Madame Leota and Gravekeeper portrait paintings.

This is a good gift for Disney collectors and LEGO® fans who like their sets on the spooky side! 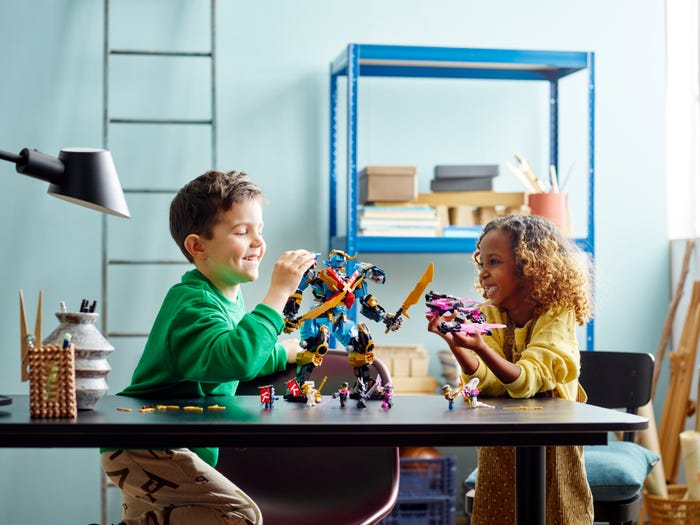 Everyone who loves the LEGO® NINJAGO®: Crystalized TV series will be instantly captivated by Nya’s Samurai X MECH.

Some of these minifigures have never been seen before and can’t be found in any other LEGO® NINJAGO® building set, which makes this the best gift to impress any NINJAGO fan! 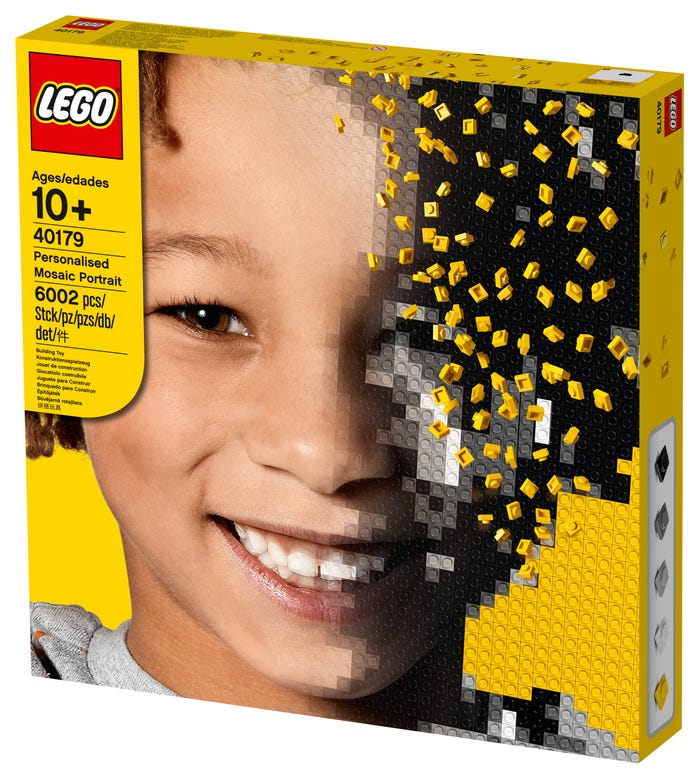 Know someone who sees the world in LEGO® bricks? This Christmas, with the LEGO® Mosaic Maker building kit, creative teenagers and young adults can make any photo into a cool mosaic work of art!

All they need to do is upload their favourite photo to the exclusive LEGO.com Mosaic Maker experience to get a digital image, and they can begin their project!

The best part is that this set can be rebuilt as many times as they like, simply by getting a new digital image each time.

The Mosaic Maker experience is unique to LEGO.com and selected LEGO Stores. Find a store near you to join the in-store experience for even more creative building fun! 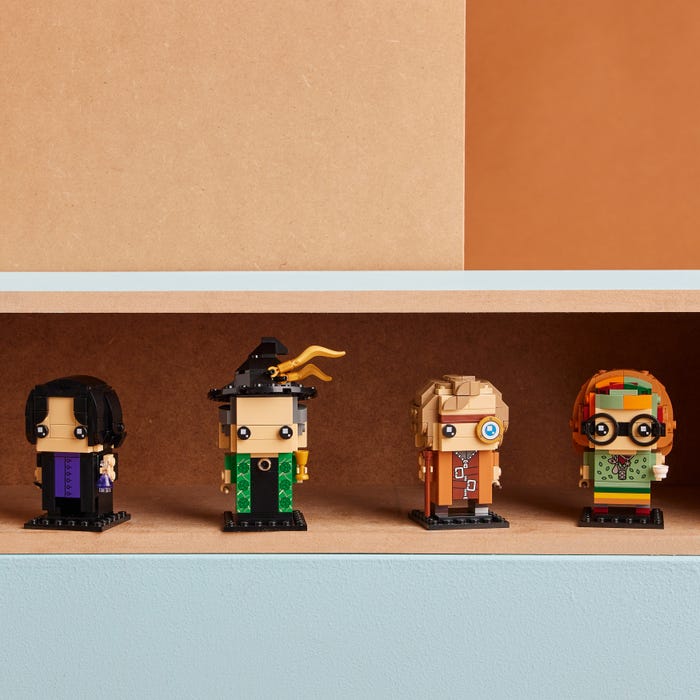 This Christmas gift is sure to enchant Harry Potter™ fans aged 10 and above.

Featuring four collectable BrickHeadz figures of four of the most famous teachers at Hogwarts™, this set comes with individual baseplates to display Professors Snape™, McGonagall™, Moody and Trelawney in kids’ rooms.

Whether you’re searching for the perfect gift for a little LEGO® fan, a teenage builder or an adult enthusiast, we’ve got tons of gifts that they’ll absolutely adore this Christmas.

How to Decorate your Home for Christmas with LEGO® Bricks

Looking for Christmas decoration ideas? We’ve come up with the best ways to decorate your home for the festive season...