Limit 5
Warning!
Choking Hazard.
Small parts.
Building Instructions
8+Ages
490Pieces
449
VIP Points
211702117021170Item
Take a Minecraft™ player’s passion for their favorite online game to the next level with LEGO® Minecraft The Pig House (21170). This authentic Minecraft playset has all the fun, creativity and adventure of the online game – plus the physicality and versatility of LEGO building toys.Looking for the perfect Minecraft gift?Kids use their Minecraft skills to build the kind of wacky creation they create in the online game: a house shaped like a giant pig. The side of the structure opens to reveals alarge room and a lift-off roof uncovers more room to play. The model is endlessly reconfigurable – and the entire head-room detaches to fit elsewhere on the model. Alex, the game’s heroic daredevil, is here to share the fun, while an iconic Creeper™ is determined to ambush the players. There’s activity outside too, with 2 cute pigs to care for. And, for added Minecraft authenticity, there’s an explosion function that blasts the toy to pieces! 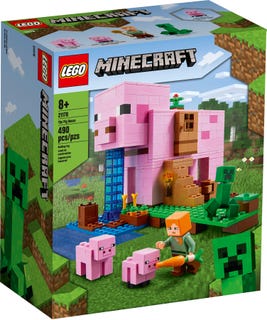 Overall RatingAverage rating4.6out of 5 stars
4.6
(9 Reviews)
100% would recommend this product.