It wasn’t that long ago that fidget toys were everywhere. In 2017, at the height of their popularity, the whir of fidget spinners could be heard by every school gate, bus stop and in offices everywhere.

But during 2020, we all had a bit more time on our hands and they made a bit of a comeback, with more and more people turning to fidget toys to park anxiety and find focus.

So how does it work? Science has shown that as well as the sensory-triggering toy itself, the act of playing without a goal can quieten our busy minds.

Fidgeting can even make you more creative. Studies have shown that physical movement such as doodling can help with cognitive activities like problem solving. So, fidgeting could actually help you think and express yourself. Lots of artists talk about how repetitive, mindless movements help their creative practice. Grayson Perry discusses in his book ‘Portrait of the Artist as a Young Girl’ how his early experiences with LEGO® bricks helped calm his mind and kick-start his creativity:

“Making things with [LEGO bricks] was a restful, meditative creativity that involved solving technical problems that had no emotional sentimental content. It was an escape from emotional chaos. There were only a limited number of options for how the bricks could fit together and that was comforting.” 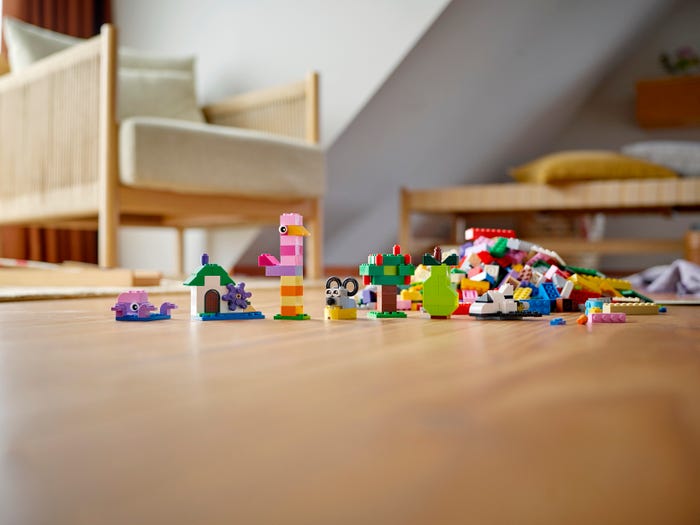 Here are our top tips on how to use LEGO bricks to fidget your way to a calmer mind.

Throw out the rule book and build freely

As adults, we’re conditioned to believe that the things we do to entertain ourselves need to be structured. But as children, play doesn’t have an end goal. We played for the sake of playing. It’s that aimless exploration that lets our minds wander. So set yourself down to a bucket of bricks and see what happens. It doesn’t have to be perfect, just get lost in the process and watch your thoughts quieten as you do. If you’ve seen our #RebuildTheWorld campaign, you’ll know that the unexpected roads in our imagination are often the most interesting. 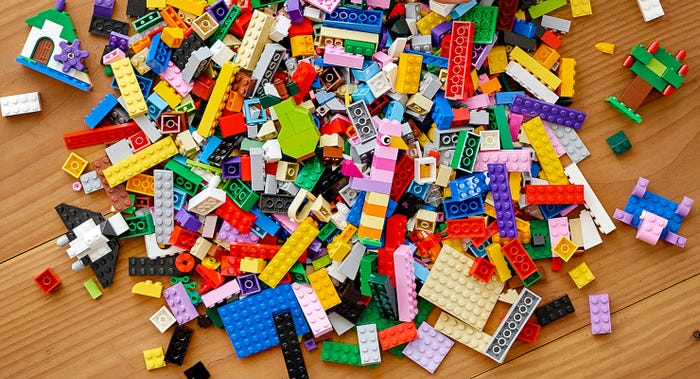 Do you remember the first time you felt the satisfaction of two LEGO bricks clicking together perfectly? Or have you ever felt calmer by clicking your pen repeatedly? Maybe you’ve felt joy by squeezing a pebble in the palm of your hand? That oddly snug and satisfying feeling is what makes for a great relaxing and fidgety build. If you’re looking for new bricks to add to your collection or wondering which ones make for better sensory satisfaction, here are three things to look out for:

Sound is a powerful relaxation tool. In fact, some sounds can physically reduce the level of stress hormone (cortisol) in our bodies. The British Academy of Sound Therapy even made a song, which is said to reduce blood pressure. To bring some sound into your build, look for parts that can click, collide or make a collective noise when they move together.

Rounded objects and shapes have been proven to be perceived as relaxing. In a 1921 study conducted by the Swedish psychologist Helge Lundholm, subjects were asked to draw lines representing a set of emotional adjectives. When describing words like gentle and mindful, the majority of subjects drew curved lines. Now we know what you’re thinking… LEGO bricks aren’t traditionally all that… round. However, there is much satisfaction to be had by making something round out of something that isn’t. Doesn’t make sense? Check out this rotund build from ‘The Brickman’ and we guarantee you’ll understand what we mean…

The key to fidgeting with LEGO bricks is movement. Pins, axles and connector parts can be used to create free-flowing builds that can take any shape and easily be fiddled with again and again. When it comes to using LEGO bricks to create something oddly satisfying and calming, the options are as wide as your imagination.

Watch how to make a fidget toy using LEGO bricks

Check out the most oddly satisfying LEGO® brick creations...

For this International Women’s Day, we sat down with six of our designers for a talk on gender imbalance in design…

If you know a young artist who loves to play, these great LEGO® arts and crafts sets are sure to help them express their creativity in fun new ways!