Make way for the powerful LEGO® Technic Crawler Crane! This huge, robust 2-in-1 model comes with an array of realistic details and exciting features. Activate the included Power Functions motor and use the joysticks to operate the boom, raise and lower the claw, rotate the superstructure and drive the huge caterpillar tracks that maneuver this mighty machine! Includes an authentic double winch and pulley system with extensive cabling, working claw, detailed cab with tilt function, exhaust pipe and a ventilation grill. You can also extend the boom for even greater height! A cool blue and white color scheme adds the finishing touch to this awesome model. Rebuilds into a huge Mobile Tower Crane! 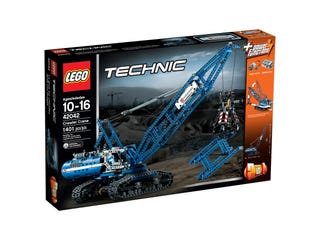