A fun and easy tool that helps you build!
Learn more
This is a brilliant LEGO® NINJAGO® ninja market featuring 9 LEGO minifigures including NINJAGO Digi Jay and Avatar Nya, and a host of other mini-ninjas and villains. With these ninja collectibles and plenty of cool accessories, NINJAGO fans can freely express themselves and recreate scenes from the Gamer's Market in Prime Empire. An exciting new way to build your toy playset with ninja collectibles Instructions PLUS offers an interactive guide to constructing this toy playset featuring minininjas. Available on the free LEGO Life app, it has zoom and rotate viewing tools to help children piece together their LEGO bricks. The perfect buildable toys LEGO NINJAGO building sets make the perfect gift for kids by letting them enter a mystical world of adventure to team up with their ninja heroes against the forces of evil. NINJAGO® fans will be endlessly entertained as they role-play with action toys including gaming figures, buildable toys, cars, dragons and more.
Building Instructions 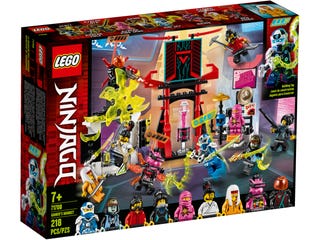 Some exclusions apply. Visit our Deliveries and Returns page for more information.
Overall RatingAverage rating4.8out of 5 stars
4.8
(12 Reviews)
92% would recommend this product.