Defend the kingdom of Knighton, home of the futuristic LEGO® NEXO KNIGHTS™ knights, with this fun set, featuring a double disc shooter that the Royal Soldier can use to knock down the advancing Ash Attacker. Includes 2 minifigures: a Royal Soldier and an Ash Attacker. 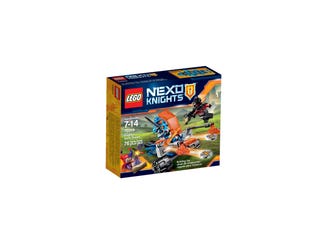