Take a trip: the history of the iconic Vespa 125 scooter

The Vespa scooter is just as much an accessory as it is a vehicle.

It’s practical, stylish and unites people from all over the world with a shared passion for travel and getting around in style.

Whether you’re on the back streets of Vietnam or the bustling piazzas of Rome, this iconic two-wheeler has bridged the gap between generations and cultures, all while keeping its timeless charm. A bit like LEGO® bricks, we suppose.

The big news is... you can FINALLY display a LEGO brick replica of the classic Vespa 125 on your shelf. It’s a collab that we’re super excited about.

To honor the fabulous new set, we look back at the history of the iconic Italian scooter and how it’s become such an integral part of daily culture and style.

What is a Vespa? 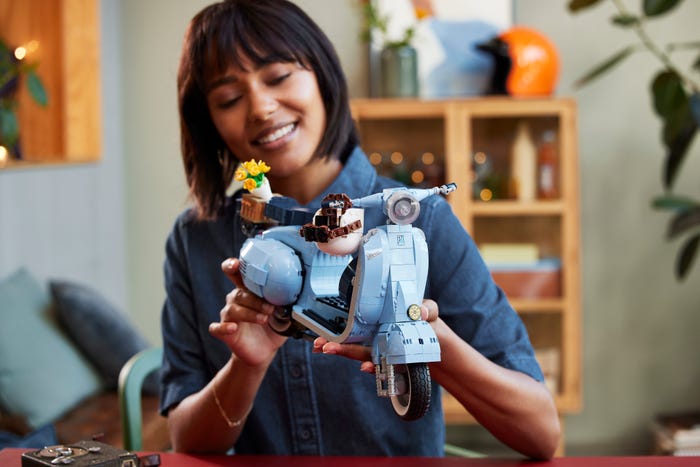 Since you’ve found your way here, we’ll assume you know what a Vespa is. Yep, a motor scooter!

The history of the scooter has been long and successful, crossing borders and oceans bringing Italian style to the roads for over 75 years.

The set comes in a refreshing light blue color and even features the accessible engine with realistic details.

Who invented the Vespa? 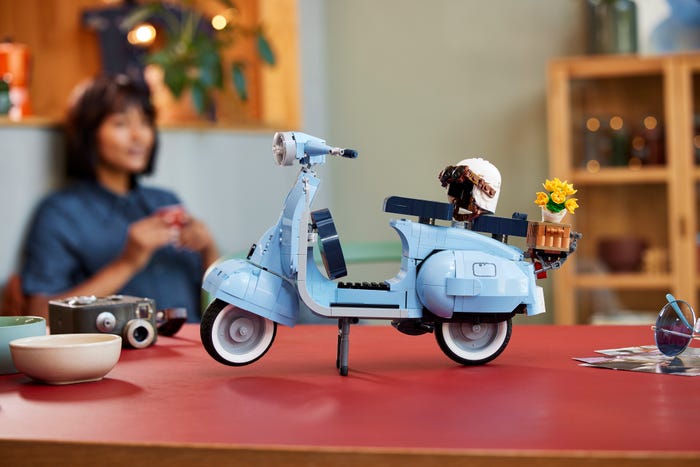 We can thank the Piaggio brothers for inventing the Vespa.

The Italian family originally worked in aeronautics, but after WW2, the brothers wanted to address Italy’s need for safe and affordable transport for all.

So, they shifted their focus to scooters (instead of aircrafts) and filed the patent for the first Vespa in 1946.

The scooter provided a convenient and affordable way to get around the city, giving the population a sense of freedom and joy post-war. It was the perfect symbol of a bright new future.

It could zip through traffic, and it fast became a hit amongst Italian commuters. And nothing has changed since.

What country did the Vespa originate from? 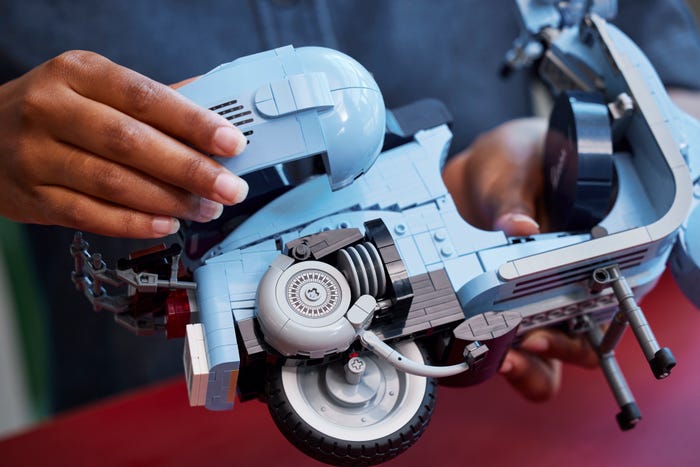 Italy! The Vespa’s story all began in Pontedera, in the Pisa region of Tuscany.

In fact, the Piaggio headquarters are still there today with a few other manufacturing locations around the world. You can even visit the Piaggio Museum in Pontedera to learn more about Vespa’s history.

In celebration of this iconic vehicle, our LEGO® set is packed with authentic features like a retractable kickstand, steering function and even a charming basket...

So, we’ll just sit here dreaming about riding into the Tuscan sunset with fresh bread and flowers in tow. 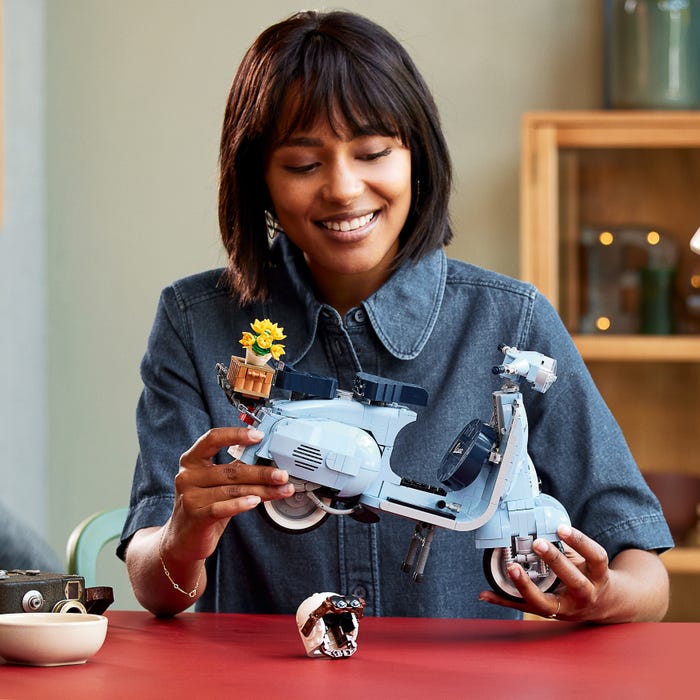 The Vespa became increasingly popular with women in the 60s, helping them to get around easily, safely (and fashionably). In fact, the scooter captured the care-free spirit of the decade and speedily became a fashion statement during this period and a symbol of independence and empowerment.

The pastel blue tone was very much of its time and the only color the 125 was available in when it launched.

Since vintage helmets became the new accessory, it only makes sense for our LEGO® brick version to come with a buildable helmet to display.

In the past decade, almost 2 million Vespas have taken to the roads across different continents, ridden by anyone, of any gender, from any race.

What does the word Vespa mean? 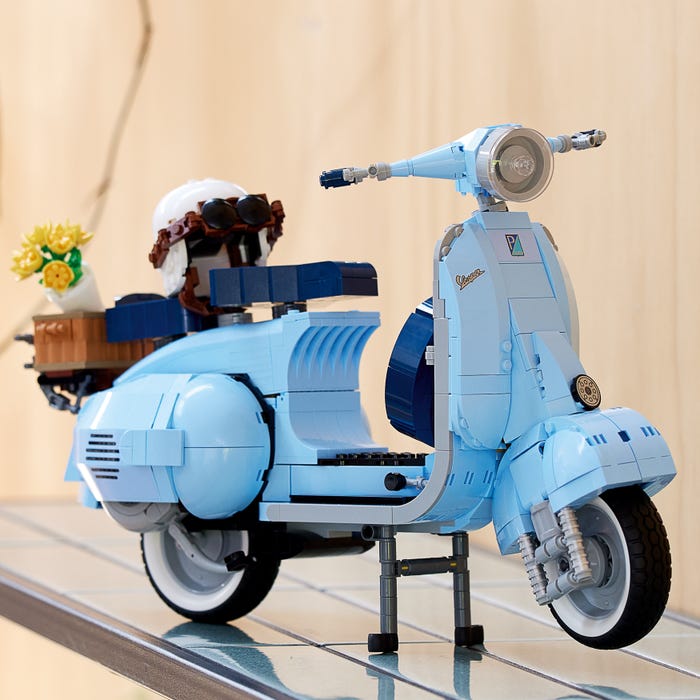 Did you know that ‘vespa’ means ‘wasp’ in Italian? This is because of its special design, front handlebars and its unique buzzing sound, resembling the appearance of a wasp.

Over the years, the Vespa has had several iterations and new colors, but it’s always stayed true to its classic aesthetic and wasp-like shape.

What is special about the Vespa? 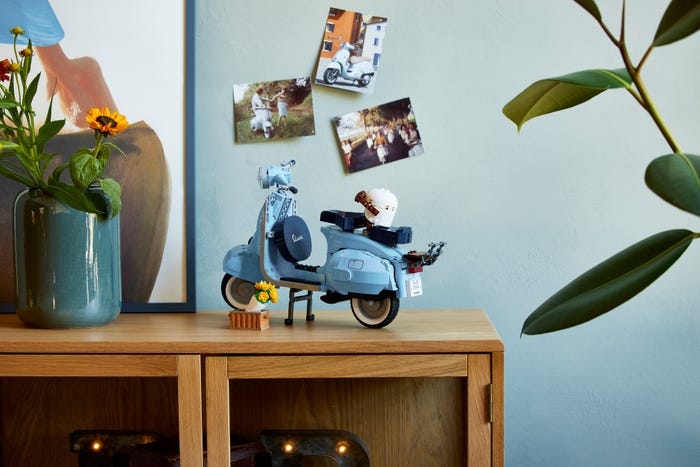 The Vespa holds a special place in the hearts of so many. It might remind you of fun times on holiday, or when you or a family member once owned one, or maybe it features in your favorite movie? There are many different reasons as to why people resonate with the Vespa 125.

While it’s neatly perched inside garages of elite Hollywood stars, it’s also proved its importance in the everyday lives of us normal folk.

So, if the Vespa means something to you, or someone you love, make the LEGO® Vespa 125 scooter a new addition in your home for a stylish, timeless and unique statement piece.