Make the LEGO® Super Mario™ universe extra exciting for kids with this Reznor Knockdown Expansion Set (71390). It features buildable rotating platforms that spin by turning LEGO® Mario™ and/or LEGO® Luigi™ (figures not included) on the connected stand. Use the Skewer to knock the 2 Reznor figures off the rotating platforms and rescue the Blue Toad from the top. The set also includes a seesawing Grrrol, ? Block and a Special Pipe: Speed Run for speed challenges. (Note: the 71360 or 71387 Starter Course is required for play.)

Teaming up is fun
Kids can play solo, team up or compete against a friend who has a LEGO Mario or LEGO Luigi figure. Check out the free LEGO Super Mario app for building instructions, creative inspiration and more. 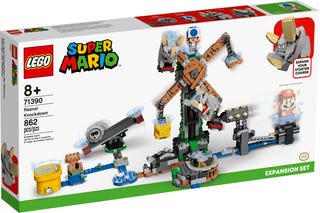