VIPs: Get a Pirates and Treasure VIP Add On Pack with purchases over £50*

You’re running low on supplies that the Overworld just can’t offer… light the obsidian portal and step through to reach The Nether Fortress! This forbidding structure is protected by an array of hostile mobs. Help Alex defeat the Blaze that guards the fortress. Take your diamond pickaxe and mine glowstone to light your way, but be careful not to trigger a lava flow! Build an access point to breach the fortress wall, grab your diamond sword and spring a surprise attack on the Zombie Pigman. Takeon the red-eyed, fireball-shooting Ghast to obtain the chest containing 2 diamonds and a golden sword, collect mushrooms and Nether wart, and mine Nether quartz ore. It’s all in a day’s work for a LEGO® Minecraft™ hero! Rebuild the set for more LEGO® Minecraft™ creations! Includes 3 minifigures with assorted weapons and accessories: Steve, Alex and a Zombie Pigman, plus a Blaze and a Ghast. 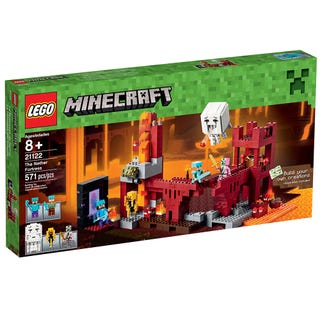