FREE exclusive Creative Fun 12-in-1 set with purchases over £85.*

Role-play battle scenes with the web warriors protecting Aunt May from Green Goblin, who has a flaming pumpkin bomb and a Goblin Glider with stud shooters, along with Kraven the Hunter and Scorpion. Press the bridge's flag to launch a net to trap the villains, or launch a Super Hero from the side of the bridge and swing into action. Create wall explosion effects in this action-packed set, which also features a trap door, catapult, Spider-Man's web prison and Kraven the Hunter's secret lair. Includes 7 minifigures. 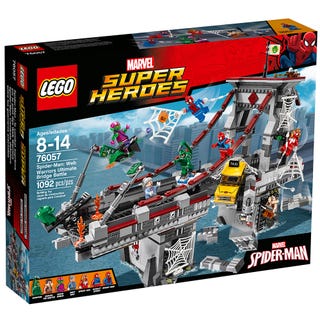 Some exclusions apply. Visit our Deliveries and Returns page for more information.
Overall RatingAverage rating4.7out of 5 stars
4.7
(16 Reviews)
88% would recommend this product.