Watch out! The mobile vet unit is under attack from Blue and Charlie, two marauding raptors. Drive the powerful vehicle at top speed to evade their charges. Join Owen on the motorbike to distract the dinosaurs and lure them away with the flare. Fire the rotating rooftop shooter to repel the raptors and put them to sleep with the ACU trooper’s tranquilizer gun. Includes 3 minifigures with a weapon and assorted accessories: an ACU trooper, Owen and Claire. 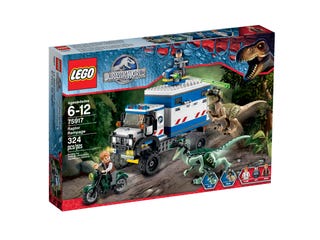 Some exclusions apply. Visit our Deliveries and Returns page for more information.
Overall RatingAverage rating4.6out of 5 stars
4.6
(20 Reviews)
100% would recommend this product.