Enter the world of Disney Frozen on an exciting sleigh ride with Anna and Kristoff. Whether you're traveling through the snow or shopping for winter supplies at Wandering Oaken's Trading Post, Kristoff's sleigh allows you to reenact memorable scenes from the film and create new stories of your own. Includes Anna and Kristoff mini-doll figures plus Sven the reindeer. 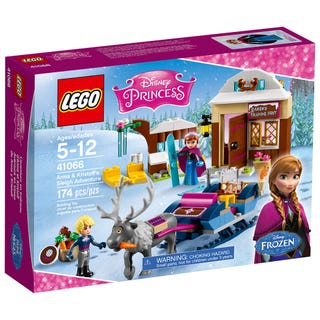 Overall RatingAverage rating3.9out of 5 stars
3.9
(12 Reviews)
83% would recommend this product.

Play ExperienceAverage rating4.3out of 5 stars
4.3
Level of DifficultyAverage rating2.4out of 5 stars
2.4
Value for MoneyAverage rating3.8out of 5 stars
3.8
Please note that by submitting a helpfulness vote on a review your IP address is collected and stored by our trusted third party service provider for the sole purpose of preventing multiple entries from the same IP address. To see how to control your personal data, please see our Privacy policy.