Pick up your badge and help stop the LEGO® City 60176 Wild River Escape! This police boat toy building kit for 5-12 year olds features a police speedboat with big outboard engine and bubble lights, a raft with big pontoons, a paddle and space for an opening box. Includes 2 minifigures and a skunk figure. 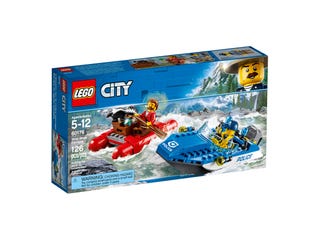